Pregnant women and new parents are paired with professional musicians to create personal lullabies for their babies.

The program supports maternal health, aids child development, and strengthens the bond between parent and child.

SISTEMA CYPRUS- One of 35 national and international partners of Carnegie Hall.

This season, Sistema Cyprus serves as an international partner for the Lullaby Project, a program of Carnegie Hall’s Weill Music Institute (WMI), that pairs pregnant women and new mothers and fathers with professional artists with the purpose to write personal lullabies for their babies. The participants are offered the creative opportunity to communicate feelings, hopes, and dreams, through the intimate medium of lullabies, as they look to the future with their children. The Lullaby Project supports maternal health, aids childhood development, and strengthens the bond between parent and child.

This is the first time that the Lullaby Project collaborates with a Cypriot organization, and, in its Cypriot manifestation, the project embraces parents who are active in Sistema Cyprus, as well as parents who are newcomers to Cyprus, including beneficiaries of Caritas Cyprus.

As their companions for this creative journey, the established and upcoming artists Yiorgos Christofi, Georgia Christoforou, Andreas Michalopoulos, Mostafa Ismail, Annita Constantinou and Marios Kolonias, work closely with the families for the composition of their personalized lullabies.

In New York City, the Lullaby Project reaches mothers in hospitals, homeless shelters, foster care centres, schools, and correctional facilities. The first Lullaby Project took place at Jacobi Medical Center in Bronx, New York in December 2011, and since then it has been adopted by various regions and countries. To this day, more than 1,600 families from around the world have written original lullabies for their children, many of which are available for listening and sharing at carnegiehall.org/lullabies. Lullabies have been written in more than 20 different languages and a wide range of musical styles, reflecting the diverse backgrounds of participating families. 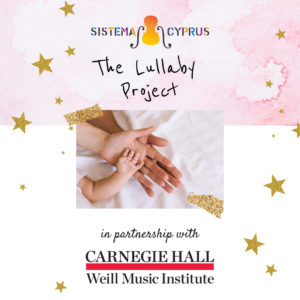 Her Majesty The Queen joined a video call this week with three winners of the Commonwealth Points of Light award, to celebrate their achievements and the importance of volunteers across the Commonwealth. The call included The Queen’s first ever virtual musical performance and virtual tour.

The Queen awards one volunteer from across the Commonwealth each week with a Commonwealth Points of Light award, in recognition of the difference they have made while volunteering in their local community. During the call Her Majesty thanked the volunteers, praising their work.

Her Majesty The Queen said: “Thank you all for taking part in this programme. I’m delighted to have heard your stories and I think it’s wonderful work that you’re all doing, and volunteering so much. Thank you very much.”

During the call, Her Majesty, Head of the Commonwealth, was introduced to three award winners from Trinidad and Tobago, Mozambique and Cyprus, who spoke of the impact of their initiatives in their local communities and beyond.
During The Queen’s first ever virtual musical performance, 45 children performed a piece of music in celebration of The Queen and The Duke of Edinburgh’s recent 73rd Wedding Anniversary.

The Sistema Cyprus Symphony Orchestra performed a never before heard piece – Modus Cyprius – due to be premiered to the public next week (composed by Cypriot composer Andreas Michalopoulos).

Nikoletta Polydorou, a music teacher from Cyprus who received her award in August 2020, founded ‘Sistema Cyprus’ in 2018. The initiative transforms the lives of children and young people from challenged communities by providing free music education and instruments, and runs its own children’s orchestra and choir. The initiative also collaborates with three Cypriot Universities to provide academic scholarship opportunities, and now has their first student studying music at University.

Her Majesty also spoke to Len Peters from Trinidad and Tobago, who received the first ever Commonwealth Points of Light award in February 2018 in recognition of his community driven conservation organisation – the Grande Riviere Nature Tour Guide Association. Over 30 years, Len’s educational work in local communities and regular patrols of local beaches has transformed entire communities, with Trinidad and Tobago now home to one of the densest leatherback sea turtle  nesting sites in the world. Len’s work also appeared on BBC’s ‘Blue Planet 2’ with Sir David Attenborough.

Len Peters said; “Here you have a young boy from a turtle eating family wanting to make a difference…at night we would walk the beach back and forth protecting the turtles…to try to convince people that it was the right thing to do. What we didn’t know, that 30 years later that effort…would see Trinidad being recognised as one of the most important nesting sites for the leatherback seas turtles in the world.”

The Queen then spoke to Ruy Santos from Mozambique who received the Commonwealth Points of Light award in July this year. Ruy founded Makobo in 2009, a collaborative working space to promote nutrition, education and youth employment, of which Her Majesty had her first virtual tour.

The space includes a Soup Kitchen, which during the pandemic fed 6,000 people daily, including lunchboxes to support local school children. In response to Covid-19, the organisation also began working with 15 local dressmakers, producing over 6,000 masks for underprivileged communities, hospitals and charity workers.

Ruy Santos said; “We are trying to replicate the lunchbox initiative and…kitchen all over the country to feed one million children by the end of 2025. But it’s more than food, we want to promote more opportunities for young people and especially women to reduce the high rates of malnutrition and illiteracy in Mozambique that effects 80% of our population.” During the call, Ruy presented Her Majesty her first gift of a facemask – one of Makobo’s handmade facemasks “from Mozambique with love”.

We are excited to be seeing our team of young musicians becoming stronger, and proud to be witnessing our Larnaca nucleo growing further with the addition of lessons for wind instruments. Key for this heart-(and ear-)warming development has been our major sponsor for Larnaca, XM Trading Point Holdings Ltd. We extend our gratitude, our young musicians’ smiles, and many melodies and harmonics to the company for helping us in making this happen!

The amphitheatre of Skali Aglantzias echoed in rhythms of love hope and solidarity!

With the hopeful message ‘Hope Lives on’, Sistema Cyprus returned with another concert which was held on Saturday 19th September 18:00 at Skali Amphitheatre in Aglantzia.

In a sold-out amphitheatre, taking care of all the measures of social distancing and measures regarding the safety and health protocol, the Orchestra and Choir of Sistema Cyprus Nicosia and Larnaka performed under the artistic direction of Santiago Ossa Alzate and Loukia Lazarou

The amphitheatre echoed with the most delightful music played by the incredible skills of the young musicians of Sistema Cyprus, the whole experience conveyed messages of love, joy, hope and solidarity to the audience. Something much needed for the difficult times we live in!

The night was also special for the group of Larnaca which performed with their cajons for the last time, thus saying goodbye to the set of percussions, in order to welcome their new wind instruments, thus creating their own wind orchestra.

Surprises were not missing from the unique concert of Sistema Cyprus ‘Hope Lives on’, as young Louis with his baton took the chance to direct the string orchestra of Sistema Cyprus and fired the enthusiasm of the audience with his talent and sauciness!

A Royal award for our Executive Director

On Friday the 21st of August, 2020, the Executive Director and co-founder of Sistema Cyprus, our very own Nikoletta Polydorou was honoured by Her Majesty Queen of the United Kingdom Elizabeth II.

Her Majesty the Queen, as head of the Commonwealth, has recognized Nikoletta, representing Cyprus, as the 153rd Commonwealth Points of Light recipient in honour of her exceptional voluntary service supporting marginalized children and young people through music education and the work of Sistema Cyprus.

Thank you to the UK in Cyprus - British High Commission Nicosia for hosting us today for a day we will never forget! So proud!

We are proud to announce the signing of an Interinstitutional Agreement of Cooperation between Sistema Cyprus and El Sistema. José Antonio Abreu founded El Sistema in 1975 to help Venezuelan kids learn to play musical instruments and be part of an orchestra. Because of his vision, programmes have been established around the world, following the principles of El Sistema, engaging millions of children.

As Sistema Cyprus, we are so honoured to be given the opportunity to learn from the organisation which has brought about a global social music revolution.  This collaboration will include actions such as an exchange programme between artistic directors and teaching artists, academic training, workshops and masterclasses.

Learn more about the values of El Sistema in this Ted Price Talk, by Maestro Abreu himself:

Sistema Cyprus participates in Side by Side: Digital

Due to the corona pandemic the 2020 camp was transformed to Side by Side: Digital, with online participants from 30 countries. The Final Festival Concert was a live streamed meeting point for both participants and audience. Sistema Cyprus represented Cyprus in this unique event.
Here you can experience the Festival Concert, a wonderful music manifestation of hope and community

Visual Voices and Sistema Cyprus created a beautiful #KidsGuernica Mural that was sent to Japan for the #HiroshimaPeaceMemorial Day 2020. Making all of this possible was the generous support from the #EmbassyofJapaninCyprus through the donation of painting materials.
The annual Hiroshima Peace Memorial Day will take place on August 6, 2020 with a global broadcast from the Former Bank of Japan Hiroshima Branch. The memorial will commemorate 75 years since the atomic bomb was dropped.
Heart of Peace ひろしま, a Japanese NPO, has organized a series of events from around the world that share messages for peace through art and music. They have asked Visual Voices, a non-profit organization focused on international arts-based peacebuilding, to take part in the presentation and to contribute directly through the painting of a Kids Guernica mural with youth in Cyprus. Kids Guernica paintings are on canvases as large as Picasso’s original Guernica. It is a global art project with children from around the world expressing the spirit of peace. The mural will be curated alongside other international artworks sent to Hiroshima in solidarity and for a more peaceful future.
The mural was painted by youth participating in #SistemaCyprus. Two of the Sistema youth collaborated in creating the design and the painting event was a great success. Visual Voices was overjoyed at the opportunity to work with kids from Sistema Cyprus for making such a beautiful mural with such a positive message!
The mural has now been packed and shipped to Hiroshima for the memorial on August 6, 2020. A big thank you to Sergio Vaccaro for the portrait photos and to Elia Neophytou for her artistic guidance!